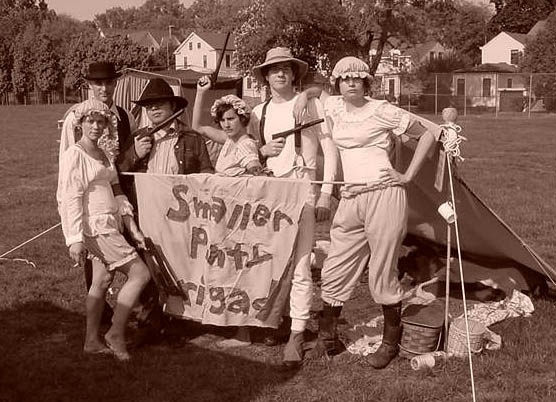 Smaller Panty Brigade was created to fight for smaller britches as part of the Muster Event on Governor's island in collaboration with Leah Howe, Dan Larson, Natalie Campbell, Pitchaya Sudbanthad and Nathan Sutton.

THE MUSTER IS A PUBLIC ART EVENT IN WHICH ARTIST ALLISON SMITH invokes the aesthetic vernacular of the American Civil War battle reenactment as a stage set for a polyphonic marshalling of voices in her artistic and intellectual communities. The Muster takes form in a creative encampment on the Fort Jay marching grounds of Governors Island, in which fifty enlisted participants fashion uniforms, build campsites, and declare their causes publicly to an audience of spectators. Smith creates a literal platform, complete with banners and flags, to identify the creative minds in her midst and to celebrate what they are fighting for. Smith directs but does not script the event, so that its outcome is only revealed at the Muster itself.